Home > Types of Job > Be a Part-Time Catalogue Rep

Be a Part-Time Catalogue Rep 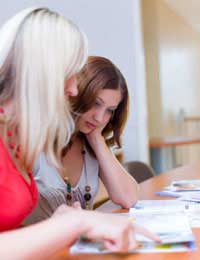 The heyday of the catalogue rep might be long gone, but for some people – mostly women – it can still offer a viable part-time income.

There was a time, long before the Internet, when buying items through a catalogue was a popular – maybe even the most popular - method of purchasing. It offered not only a good selection of items of all sorts, but also the advantages of hire purchase – you didn’t pay for the item in full when it was delivered, but so much each week until it was all paid off. It allowed people to buy items they might not have been able to afford otherwise, and also brought a little commission to the local catalogue rep, who would arrive to collect every week, and also to take more orders.

But online sales have eclipsed the catalogue. We’ve become used to going onto the Internet to find the best bargains and items not easily obtained elsewhere. However, although we suddenly have access to quite literally a world of items, we’ve given up some things, like the personal touch and also the ability to pay over time.

There are still plenty of people who don’t shop online, for all the newspapers scream the popularity of online transactions. Obviously, there are those without computers (and computers are nowhere near as ubiquitous as we often imagine), as well as older people who don’t trust the security of online shopping, or can’t get out of the house to buy things, and together they make up a reasonable percentage of the population.

That means there are still plenty of people who like to shop with catalogues, to have the rep stop by regularly. With older customers it can become a social occasion, a chance for a cup of tea and a chat.

Several catalogue companies do still operate, and like most companies, are usually looking for reps. It’s different to companies that operate parties, since catalogues work through friends and relatives and world of mouth – with some of the there’s no real territory as such, while others do assign an area.

You won’t make a lot of money as a general rule, and you will have bosses who supervise a group of reps. But you will make a commission on each sale.

The Advantages of Being A Catalogue Rep

It’s ideal for mothers of young children, especially working mothers, because it doesn’t take much time each week, and is flexible enough to fit in around all your other responsibilities.

It also get people out of the house, and helps them connect with their neighbours, building a sense of community that’s all too often lacking these days.

There are no hidden costs with most catalogues. Some require an upfront investment, especially those involving cosmetics, but everything is openly stated, and with many others there’s no money involved at all. Although reps don’t generally make much, there is the opportunity to advance and become a supervisor, or even an area manager, although those posts would probably require owning a car and a computer.

It might not be a glamour job, and it might not seem especially cool. But being a catalogue rep, apart from bringing in some extra money, actually performs a public service to those who don’t trust or own computers, or who might not be able to get out to shop properly.